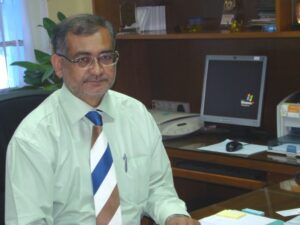 Professor Indranil Manna, a JC Bose fellow and the Vice Chancellor of BIT Mesra has assumed the mantle of INAE as its 14th President on Jan 1, 2021. Earlier, he served as the Vice President (Fellowship and Awards) between 2015-2020 and as a member of the Sectional Committee VIII during 2011-2014. He was an INAE Visvesvarya Chair Professor (2009-2011) and INAE-AICTE Distinguished Industry Professor (2007-2009), led INAE delegation to USA in 2014 and Republic of Korea in 2018, and contributed to the Curriculum Revision Committee in 2003.

Professor Manna is a metallurgical and materials engineer. He obtained his B. Engg. Degree from Calcutta University (BE College) in 1983, M. Tech. from IIT Kanpur in 1984 and PhD from IIT Kharagpur in 1990. He was a Premchand Roychand Scholar (1992) and a Mouat Medal awardee (1999) of Calcutta University and received Honorary Doctor of Science Degrees DSc (hc) from the University of Kalyani and Kazi Nazrul University, Asansol, West Bengal, both in 2017.

After a brief stint at Mishra Dhatu Nigam, Hyderabad (1984-85), he joined IIT, Kharagpur in November 1985 as a Lecturer and rose to the position of Full Professor in 2003 and HAG Professor in 2009. He continued in this position till he joined CSIR-CGCRI as the Director on March 1, 2010 which he continued till October 31, 2012. Subsequently, he served as the Director of IIT Kanpur during 7Nov2012 to 6Nov2017. During this period, he concurrently served as the National Coordinator of IMPacting Research INnovation & Technology (IMPRINT), a national technology development initiative of MHRD, Government of India. He played an active role in several other MHRD initiatives like UAY, SPARC, UBA, RAA, PMMMTTP, Namame Gange, etc. He was the Chairman of the Research Council of CSIR-AMPRI, Bhopal, Member of the Research Councils of BHEL, CSIR-National Physical Laboratory (NPL), Society of IIM Indore, Board of Governors of IIM Lucknow, IISER Pune, IIEST Shibpur and IISER Kolkata. He was a member of the Governing Body of the Indo US Science and Technology Forum (IUSSTF), Executive Council of AICTE, and a Member, Administrative Council of the Abdul Kalam Technical University, UP. He was a member of SAMAVESH, a NITI AAYOG Think-Tank Group. He has been actively associated with various Science and Technology (S&T) organizations in the country in various capacity like Chairman, INSA-INSPIRE Faculty Fellow Scheme (Engineering Sciences) of the Department of Science and Technology (DST), Chairman of the Program Advisory Committee (PAC) of the Metals, Materials, Mining Engineering Section of SERB-DST, Member of the Board of the Steel Research Technology Mission Initiative (SRTMI), PM Trophy Committee and R&D Board of the Ministry of Steel, and Member of the Research Council of ARCI, Hyderabad (DST) and GAIL India. He is currently the Chairman of Research Council of CSIR-NML, Jamshedpur. He was an active member of the committee on Science Technology Innovation Policy (STIP) of India and chaired the Surface Engineering (V12H3) group under the Advanced Manufacturing Forum of Vaishwik Bharatiya Vaigyanik (VAIBHAV) scheme inaugurated by the Hon’ble Prime Minister on 2nd October, 2020. He is a Member of the Academic Council of KIIT at Bhubaneswar, Homi Bhaba National Institute (Department of Atomic Energy) and Ramakrishna Mission Vidyamandir at Belur.

Before taking up administrative responsibility, Professor Manna taught subjects related to physical metallurgy, phase transformations, material characterization and surface engineering at IIT Kharagpur for 25 years (1985-2010). During this period, he visited different renowned R&D institutions and universities abroad as a guest scientist like Max Planck Institute at Stuttgart, Technical University of Clausthal, Unipress in Warsaw (Poland), Liverpool University, Nanyang Technological University, National Institute of Materials Science at Tsukuba and University of Ulm with teaching or research assignments. Professor Manna has been a renowned and prolific researcher with wide ranging research interests concerning microstructure-property correlation and modelling in structural and functional materials including additive manufacturing, nanometric metals/composites, laser/plasma assisted surface engineering, nano/ferro-fluid and bainitic steel. His significant contributions on amorphous Al-alloys, laser surface engineering of steel/Mg/Ti alloys and thermal and magnetic properties of nanofluid and ferrofluid received serious attention from the scientific community and are highly lauded. His early contributions in moving boundary phase transformation are still widely cited. Professor Manna has authored over 275 journal publications, supervised 30 PhD theses, conducted about 35 sponsored projects from agencies and industry in India and abroad worth over Rupees 25 crore and holds 3 patents.

During his initial stint at IIT Kharagpur, he is credited to have developed various research facilities and laboratories in the Metallurgical and Materials Engineering Department comprising characterization and processing tools like FEG-SEM, PLD, PIII, SOFC, electron beam welding, mechanical alloying mills, wear and erosion testing units, vacuum sealing set up, high temperature furnaces, plasma nitriding unit, etc. He was the Institute Coordinator for the Nano-Science and Technology Mission Project (2004-10), and the Vice Chairman (2004-06) and Chairman (2006-09) of the Central Research facility at IIT Kharagpur. With a major research grant from the DST, he has recently developed a well-equipped laser material processing facility at IIT Kharagpur in 2018 with a 6 kW fibre delivered diode laser with several allied analytical and processing equipment to develop structurally and functionally graded materials, composites, coatings and additively manufactured (3d printed) metallic components.

Professor Manna is a recipient of several awards and honours including MRSI Distinguished Lecture Prize 2017, Gopal Tripathy Memorial Lecture Award of Banaras Hindu University in 2015, TWAS Prize in Engineering Sciences in 2015, and Platinum Jubilee Medal Lecture Award in the 98th Session of the Indian Science Congress in 2011. Earlier, he was the Sectional President of the Materials Science Section in 2009-10 and Recorder in 1998-2000 of the Indian Science Congress Association. He received the G D Birla Gold Medal of IIM in 2008, MRSI Medal in 2000, Binani Gold Medal of IIM in 1999, AICTE Career Award for Young Teachers in 1995, and INSA Medal for Young Scientist in 1992.

He received Distinguished Alumnus Award from IIT Kharagpur in 2016 and from IIEST, Shibpur in 2014. He has been a JC Bose Fellow of DST since 2012. He was elected a Fellow of all the National Academies in India: Indian National Academy of Engineering, Delhi (INAE-FNAE) in 2005, National Academy of Sciences in India, Allahabad (NASI-FNASc) in 2005, Indian Academy of Sciences, Bangalore (IASc-FASc) in 2008 and Indian National Science Academy, Delhi (INSA-FNA) in 2010. He is a recipient of Alexander von Humboldt Fellowship (2001-2002), DAAD Fellowship (1988-1990), DAAD Honorary Advisor (2006-09) and GTZ Research Grant (1997-99) from Germany (for independent research). He is a former Vice President (2013-16) and President (2016-17) of the Indian Institute of Metals (IIM). He was felicitated by the Ministry of Steel with the Young Metallurgist (1991), Metallurgist of the Year (2002) and National Metallurgist Award (2018). He was elected a Fellow of The World Academy of Sciences (TWAS) in 2016 and a Member of the Asia Pacific Academy of Materials (APAM) in 2014.

Professor Manna was born on January 22, 1961 in Kolkata, is married to Mrs Snigdha Manna and has a daughter (Oindrila) and a son (Rudroneel). He was an active sportsperson in his student days, is an avid sports and music lover and is passionate about technology development for the nation and society.

1. Clicking New Nomination Button will open ‘Search for Fellow’ Window.
2. Search for Fellow may be done based on Engineering Section followed by Name (not mandatory).
3. Filters for search may be used based on Country, State and City.
4. Once the ‘SEARCH’ button is clicked, the names corresponding to the criteria specified in the search box will be displayed below.
5. Maximum 20 names are shown in a page. To view the complete list of Fellows under the search criteria, next pages may be traversed.
6. Pagination appears before the block of search as well as at the bottom of the page

1. Search for Fellow may be done based on Engineering Section followed by Name (not mandatory).
2. Filters for search may be used based on Country, State and City.
3. Once the ‘SEARCH’ button is clicked, the names corresponding to the criteria specified in the search box will be displayed below.
4. Maximum 20 names are shown in a page. To view the complete list of Fellows under the search criteria, next pages may be traversed.
5. Pagination appears before the block of search as well as at the bottom of the page